I like being generous towards people who’ve helped me this year, like my co-workers. Without them, my job would be so much more difficult, I’d never get a break! To thank them, I want to give them something I think they’d appreciate, but I can’t go overboard with my spending since I’m on a tight budget. Many years ago, a colleague gave me a delicious Tang Tea mix in a mason jar. She made the tea mix from an old recipe and canned it herself. I thought it was a great and inexpensive way to give thanks. This year, I’ve decided to give my colleagues homemade drinks in mason jars, sort of copying that gift I received years ago.

I just finished an assignment and worked with 2 teacher aides who were really helpful. Since I will be seeing them this week, I wanted to thank them before the holiday rush begins. I had two drink recipes in mind for their mason jar gift and a list of ingredients I needed for both. I went to the grocery store the day after Thanksgiving, a great day to go by the way. There was no one there, everyone was at the malls! It turned out that my grocery store doesn’t sell Tang anymore (needed for the Tang Tea recipe), so I narrowed my gift idea down to one recipe, a mocha coffee drink. 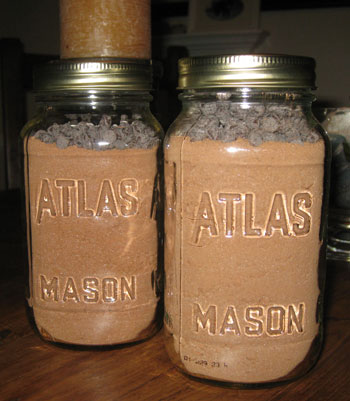 There were a few more ingredients involved in the mocha coffee drink, so my total expenditure was a bit more costly (I realized after making the mixture, I bought way more cocoa than I needed). I purchased enough ingredients to make 4 jars. Since I am reusing old spaghetti sauce mason jars, I only had to purchase Ball lids. After gathering my ingredients, I estimated each jar costs about $4.00. Below are a list of my ingredients (I got the recipe from Tipnut.com):

I decided to mix the recipe before putting it in the jar. The Tipnut.com image shows the ingredients in layers, and it looks pretty. The only problem I see with this method is using it without mixing it first. Since the ingredients aren’t in equal parts, you may end up with more creamer than cocoa in your cup, and that wouldn’t taste good. Each jar recipe should provide the recipient with about 7-8 drinks.

I taste tested the mix before sealing the jars, and it was very chocolatey with a hint of spice (thanks to the nutmeg and cinnamon.) My taste test revealed that each drink tastes best with 2 heaping tablespoons added to 8 ounces of hot water (I’m thinking you could also use warm milk, too.) You can see from my photo that I added mini chocolate chips on top of the mixture mostly for looks, but they can be a tasty addition. Whipped cream or a cinnamon stick can be added to the final drink as well.

Once I add a tag listing the ingredients and how to use the mixture, tie a pretty ribbon and some fabric around the top, these jars will make terrific Christmas gifts!

P.S. Each mason jar took a little bit more than one full recipe. I made 3 full recipes and ended up using 1/4 additional mix for each jar.