When people think of home renovations that tend to think of a money pit from which they will never emerge again. People are actually shocked when they find out that they are actually some renovations and upkeep projects that can save them money. Renovations can actually help sell your house quickly as most people do not want a plethora of projects when first moving into a home. Upkeep of appliances as well as the exterior of the home is also important as neglecting these can compound the problems as well as compound the price to fix these problems. The following are some renovations and home upkeep that can save you money nearly immediately.

The amount of money that is lost each year because of poorly insulated windows is staggering. Older windows tend to be poorly insulated for one reason or another. This can cost hundreds of dollars a month depending on the size of the home and the weather outside. There are plenty of home renovation calculators online that allow a person to get an accurate estimate of what a renovation project will cost. Windows can be bought that are climate specific so the winter heating bills can be reduced in price. These windows will actually pay for themselves over the lifetime of your home as well as can bring natural light into the home which many people find desirable.

There was a time where solar panels were so expensive that only those in the one percent could afford them. The prices have since dropped on solar panels and their installation making them more widely available to the average person. The prices are still a bit steep but this can help eliminate your entire power bill if utilized correctly. The government even gives a grant and tax break for installing these as it is a part of a green initiative by the federal government and some state governments. This will also make the resale value of your home much higher as eliminating the power bill for life is quite desirable to everyone.

People do not realize that their AC unit might not be running at optimum level. They figure that because the home is the temperature that they want it that everything is running great. This couldn’t be further from the truth as people waste hundreds of dollars a year on account of their heating and cooling not running in an efficient manner. Checkups for AC units should be done at least once a year before the time the electric bill usually jumps up. This could be summer for a state like Florida or winter for a state like Massachusetts. Checkups on these units can also allow them to last for much longer which is a huge money savers . There are new units that can cost well over $5,000 including installation.

Home renovations don’t have to be money pits but rather should be able to pay for themselves over a long period of time. Consider investing in one of these as it will end up paying for itself in the future! 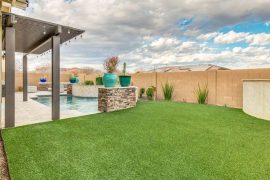 Why Use Artificial Turf & How To Install It